Terry Pratchett made an excellent point when he wrote about “lies to children” as in we tell them lies about the tooth fairy so that later they can believe in big lies like truth and justice.

Grind the universe down ever so fine and you will see not one speck of justice.

To teach we tell lies to children, we tell them how the world works, what dinosaurs looked like, why rainbows, and as they get older we reveal those lies and tell them more lies.

In budo we tell lies all the time. When we teach beginners we tell them that they are learning to fight. When they say “what if he does this” we say “do this”. It works for them, they like the answer and continue practicing until one day they realize we lied to them.

We lie about small things so that they learn enough to learn the next thing.

One of the folks said “that’s not lies, that’s how you have to teach kids”. You can’t teach six year olds the same way as you teach high school kids. That’s true, but they are still lies. This same fellow said he was watching the US history channel for a while and realized that it was set at about a grade four level. Recap after every commercial, talk about the Maya for a while and suddenly “aliens” show up. Lies.

Suigetsu, the second jodo kata in the seitei jo collection is taught as “step to the right front and stick him in the solar plexus, he will stop with his sword half way through the swing”. It’s a lie. Now some people believe it and also believe that harder is better on the theory of “more”. One pill is good for you so seven must be great.

The thing is, more lie is still a lie. It’s not about thrusting to the solar plexus and it’s not about stopping a body behind a razor blade coming at your head. If the man really intends to kill you, poking him in the solar plexus isn’t going to stop him. But, when students learn the lie well enough we can teach them that it was a lie and they can go on to learn the next, bigger lie. Maybe that it’s all about balance, or a different target.

We can tell beginners about that next lie, but we can’t really show them. They can’t do it. We can’t allow them to try things with those who will be injured. Seniors are going to attack with the sword and stop above the head, not because beginners have touched their suigetsu, but because the kata says stop there. When beginners are learning the sword side we may say “stop here or he will hit your elbow and it will hurt”. “True for a given value of true”.

Seniors are not going to take a beginner’s balance when he attacks with a sword. That will 1. knock him on his arse or 2. hurt him. Both of which are not useful for learning. A senior can take a senior’s balance because both of them can adapt, both can adjust.

When should we start working on the big lie? Should we forget what you just said sensei?

Just do what you’re told in class and trust that sensei has a reason for asking you to do things. If you don’t like it, do it anyway and when you learn that lie a bigger lie may appear. This stuff isn’t about things you can see, things you can film, it’s about stuff that isn’t there. Stuff that doesn’t show up when you grind it all down to dust.

Emergent properties, go look it up.

A teacher can only teach what they know. I didn’t know half the stuff I teach now when I was young and healthy. Too bad, I might know more now, but I started late. Now it’s later and I’m trying to get it across as fast as I can.

I don’t suppose that’s any different than every single other budo teacher, ever.

We only get more stupid, the more we know. The small lies make a world that is understandable. Tell a kid a lie that shuts him up and it’s quiet. Also kid “knows stuff”. Later, maybe the kid never gets over the lie. Maybe he figures budo is about selecting the best kata to respond to an attack. Maybe he figures it’s all about stopping that sword in the right position during an iaido kata. Maybe he figures that if you slow the kata down and get even more precise, work on even finer and finer technique, you’ll get better. (You will, you’ll get better at finer and finer technique.)

Those who don’t get stuck in the small lies discover bigger and bigger lies until they despair that the truth is never “out there”. That the best knowledge you can get hold of is “you’re wrong”.

Yes I’ve said “leave the 18 year olds alone, it’s the last time they will have the answers”. Leave them alone long enough and their “answers” may turn into “convictions”, into “faith” or “principles” and then you’re in trouble. Sooner or later, for their own good, you have to tell them you lied to them. 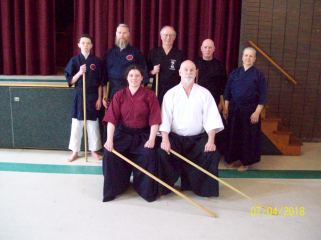 Check out the seminars below for the rest of 2018 These are all confirmed. Not lying.