I dunno, just because read Terry Pratchett and I’m thinking about doing an unusual martial art in a geography that makes it difficult to join the mainstream. In other words “I seem to be the only one around”.

My advice to beginners has always been to do what’s available. To go to the karate studio down the street. The particular martial art isn’t the issue, the instructor is. Find an instructor you can follow, one you will make an effort for, and follow him. That usually means finding someone who will make an effort for you. Goodness knows there are enough people in your life who just say no, for whom nothing is good enough, who complain but never contribute.

It’s not the art, it’s the artist.

All fine and good, but it never seems to work out that way does it. We find an art that we love and we plug away at it. I’ve been lucky enough to have found great instructors close enough to me, and arts I love to practice. I’ve also been lucky enough to extend my career by having people to teach.

None of that stuff has ever involved the desire to have a grade. I got my Aikido first kyu in five years or so and then took another six to get around to doing my shodan. No problem, I practiced the art, I had an instructor, who needs a grade? I would have had that shodan in the year it was usual to wait, but shodan needed an external examiner. The kyu grades were all given in the dojo at that time, and we just never got around to organizing a seminar. I suppose I could have gone elsewhere to grade but what’s that about? Would it change anything back home?

I started iaido and quite happily practiced on my own for four years until I found an instructor. We then practiced for another three or four years, collecting fellow students, before we organized the iaido section of the CKF. It wasn’t a question of grading or not, it was simply that grading was not available. Up to then it wasn’t an issue, although my sensei did issue his own opinions, I got to 5dan Sei Do Kai before we started grading in the Kendo Federation and dropped the system, don’t have the 5dan paper though, never got around to printing one for sensei to sign so you’ll just have to take my word and memory for it. Have a 3dan paper somewhere I think.

Not about the gradings

I keep thinking that it can’t be about the grading, there’s no money in teaching in the Kendo Federation, that’s actually against the rules. I’m sorry that it is, I’ve seen that rule get used as a weapon in the fights for power at the upper levels where you’d think this stuff would never happen. To get ahead in the administration one accuses others of “teaching for money”.

Best way to avoid that is not to want to be the “guy in charge”, to just go about one’s practice and smile and nod. It’s when you get involved in the grading part of things that you end up in those situations. Crabs in a bucket actually come to mind when I think about supposedly enlightened types gossiping behind one hand while pointing fingers with the other. Again, the best way to avoid that stuff is not to play the game.

There’s GOT to be money in there somewhere. Junkets? Maybe you get to swan around on other people’s money, flown here and there to sit on panels and teach seminars. Maybe you do, but if it’s your rank that’s wanted… well if your goal is to get a vacation and your host’s goal is to get your rank on a panel, it’s probably a fair trade. Just don’t pretend it’s anything other than a transaction.

Respect? Does one get respect for having a high grade? Does one only get a high grade if one is worthy of respect? I remember the old Judo comic from the ’50s where a black belt is throwing a white belt around, then the white belt asks to switch belts and proceeds to throw the other guy around.

Sorry to disappoint guys, but rank does not equal respect. Respect equals respect. A 7dan in iaido does not get you anything at the local hardware store or at the bank. What you need there is money, and even then, again sorry those who think so, money doesn’t bring respect, it’s just something the other guy wants off of you. Mind you, if you think envy is respect, and you figure people envy your money, well Bob Stronginthearm’s your Uncle… or maybe your cousin.

Grading exists to provide grading. It’s like practice with a sensei exists to provide more practice with sensei in the next generation, like kata exist to pass the kata down the generations. Gradings exist to perpetuate gradings. So you need a grade to sit a panel to give grades. A cruel and not so unusual system that is closed, cyclic, claustrophobic and the source of a lot of stress.

For what? Does having a grade or not, change your skill at the art? Not really, it’s just external validation. Well, I shouldn’t say “just”, we all want validation. Ever so much better if we get validation in a system that is world-wide, recognized everywhere right?

It depends. Look, if you’re on this path, if you want to do a grading, consider which path you want to take. And consider what type of grading you want to do. There are different paths for grading. There’s validation from your sensei, he says “here, now you’re a 5dan” or a mokuroku or any other rank on any ranking system you want. Your nametag goes up a notch on the dojo board maybe. Lots of things indicate rank in a dojo, and that rank ultimately flows from sensei. On the other hand, there is the organizational system, where outside experts come in and give their opinion on your skills. In that case your rank may be recognized in multiple dojo, or even multiple countries. That’s good right?

Maybe. Do you intend to go teach in some other country? To sit on their grading panels? OK fine. Is validation from strangers better than validation from your own sensei? Do you think you’d be better off with a rank from another country? The idea that a rank is better from one place over another definitely exists. There is a ranking of ranks. There are those who figure a grade from Japan is better than one from another country. It’s always Japan on top but other countries and regions get ranked by those who figure this is something we should pay attention to. So a 5dan is not a 5dan is not a 5dan.

Yeah, what-ever. Participate or not as you wish. I’ve had the discussions, it always comes down to “wherever I got my grade, that’s a better grade than yours”. Humans are heirarchy oriented, there’s always a pack mentality, whichever mon…. er ape species you look at. Always those at the top and those down the ladder and it’s complicated. Just like rank and age and sempai in the dojo. Have fun working it out.

But I keep coming back to the purpose of grading. What is it? It seems to me that the further away from your dojo you get a grade, the less meaning it has to anything but the grading system itself. It’s self-referential. If I get a grade in another country it only makes a difference to the pecking order in my own dojo if I can somehow make it make a difference.

The grass is always greener on the other side of the fence and a philosopher is without honour in his own country. This is the argument you make to insert “Geographical Grading Rank” (GGR) into your home dojo. “I got my 6dan in Japan, I’m above you rubes who got yours here.”

I remember the Aikido seminar when a bunch of 3dan University kids came from Japan. At that time 3dan was a massive rank to us lowly kyu grades. One of the local sensei was running a class and called for a hip throw, the next thing that happened was a lot of 3dans were landing on their heads, literally. Turns out they’d never done hip throws back home. Whaaaat?

Pah, it’s not about rank, it’s not about where you got that rank. It’s what you do with it, and what you did for it I suppose, which brings us to the type of grading. Is it strictly technical, maybe a three hour shodan grading featuring sparring with every other black belt in the club, plus running 5K? A nidan grade that involves a shodan rank in another art? Or maybe a short, sharp 30 seconds of sparring and off you go?

Or is it about having a patron, a powerful sponsor who will nudge the guys and say “that’s my guy”, about envelopes passed over at the party, about being a good worker and bringing in new students? Is it jumping organizations and getting another rank in the process?

Which grading is a good validation for you? Depends on what you want doesn’t it?

It’s not about rank I said. Mostly it’s about who’s your teacher… no I take that back, ultimately it’s about you. What can you do, why do you do what you do and what do you feel about that.

Get involved in the office politics, the pack heirarchy if you wish, or be the rogue elephant, the ronin, seriously, do whatever you wish. Understand what’s happening, what that stuff means to you. Understand what it means to your family, and to the “man on the street”.

If you’re someplace where you can’t grade, where you have to practice on your own, do it or not. If it’s worth it to you, practice. If it’s not, if you’re getting nothing out of it, grading isn’t going to change anything. Maybe having a sensei will change things, maybe not, but the choice isn’t there so why wish, why worry.

Sensei… you know it’s very common in Kendo Federation iaido circles to have a sensei who is of another koryu than yours? It’s true, your original sensei may have passed on or retired so you go find another sensei, not necessarily of your original koryu. Lots of reasons for this but the best one is that your new sensei can keep teaching you stuff.

It’s about more than polishing that brick. Once you’ve learned the kata of your koryu there is stuff to learn that goes beyond the kata, and you can learn that from someone who can teach it to you, provided you can listen.

And we’re back to the karate dojo down the street aren’t we?

Now the sun is coming up and I’ve done my coffee, maybe time to go work on the shed while everyone else is sleeping. Can’t sleep because… not rank concerns, oh no not that, but money. Always damned money. 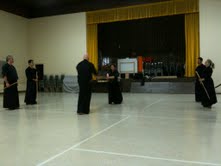 Check out the seminars below for the rest of 2018 These are all confirmed.