Does my study of academic papers truely help with my understanding of budo or should I simply get out to practice more often?

Being an academic, spending most of my working life in a University setting, I’m not likely to say that research is useless. Having written 20 plus books on the subject I’m also not likely to fall on the side of “just do what your sensei says”. In fact my sensei says that I have to write a book which starts with “My sensei says” because he read one from the past where the author did just that.

Every book I’ve written should be read with “my sensei says” at the start of each paragraph. It’s father’s day and all my budo fathers are being thanked for their teaching. Not with cards but if I see one today I’ll buy him a beer.

I’m going through research abstracts at the moment, all from the same journal, and making comments that force me to read the abstracts closely. These are all papers written in Japanese so no hope of my reading the whole thing to come to the meaning. Makes you appreciate a good abstract writer. In fact, with five companies controlling access to research these days abstract-driven research is going to become more common. There’s no way under the sun that I’m going to pay $35 for a reprint of a non-scientific paper. I’m not going to be replicating methods in this type of research, but I do need more than a glance over the abstract and a note in my head that “I’ve read it”. If for no other reason than to put it out there to my students along with the reference so that when I say “kendo is as old as most koryu” they don’t call BS at me. Did you really just say to yourself “depends on your definition”? Hah, you relativistic lefty academic you.

Back to the point, (hey, it’s Sunday morning and this dad was never going to get breakfast in bed but he can take his time over coffee). Does my reading of abstracts increase my ability to hit someone else on the head with a stick?

Yeah, it does. Understanding the historical roots of techniques means I know the rational behind them. Sure I could continue on the way I did when I was a beginner and have trust in my sensei, I still have trust in my sensei, but many of them are no longer with me. Do I simply stop here? Repeat what they told me until I die, hoping that the kata will teach me instead?

It’s not a bad plan, the kata do teach me but if I want to figure out what the original meaning was, I need to get things in context and the only way to do that is to understand the history. Take the idea that square hips and control of the centerline is a kendo thing. Not exclusive to kendo of course, but central to the art as practiced now. Where did that come from? How does it flavour the iaido of the kendo federation? How would it influence koryu done by the sensei who are in the kendo federation? How does knowing that hips were not always so square help my practice of koryu?

You see what I mean. It’s not that I didn’t know that kendo is square hips and other arts like Aikido are not, I have known that since the beginning, having done both. But to read the history of how hips got where they are gives me some extra comfort as I experiment with my own. Knowing some history lets me understand where my Aikido teacher’s teacher came up with that marvellous straight line at the end of his circular techniques. That line that cut the motion of balance right out from under you and launched you into the air. I knew it was there as a beginner but I used to grow doubt when other folks told me with massive authority that there were no straight lines in Aikido.

Part of becoming a senior is being able to pat a beginner on the head and say “yes indeed son, there is only one way to do this and you must learn that way”.

As a “30 year man” should I still believe that? Well I could, and I could probably get the highest ranks available in any organization by simply doing things “the right way” but what fun would that be? And what chance would I have of advancing the art? My buddy Jeff in Japan has lamented for years about the homogenization of iaido and I sympathize. When all the teachers are interchangeable how do we ever get to the point where we figure we can use our special understanding to drop the other guy? Part of the special, advanced teachings of budo is “the edge”. That’s a belief that you have something that will give you the advantage in a real fight. If you’re all clones of the top guy (wow I can’t even get myself to say “the right way”) then it’s all just a crapshoot as to who walks away from the swordfight. Except for the top guy of course since he gets to use a variant of a technique to beat you, which variant then becomes “the right way”.

Part of the confidence that lets you toe the line in a fight is the belief that you have a chance, and often that comes from a belief that your teacher has trained you well and distinctively. If your teacher is all about “doing it the right way” or “doing it the way it’s supposed to be done” you are going to have to hope your teacher is a better mimic than the other guy’s teacher. Me, I like my iconoclastic sensei, none of them were ever worried about a grading or a competition, they were going to show their art and the hell with the judges.

That’s a hard lesson, it’s a major change in attitude from the blindly following beginner. You must believe, you must trust, you must follow to learn, but if you don’t break away from that you’ll never do your sensei the pride of passing him by.

Reading the academic papers is part of that, if only to demonstrate to yourself that the old guys in the old days were not inclined to sit at the feet of the master forever. In fact, the master gave them some paper to remind them what the names of the kata were, and booted them out the door to go find their own way. Hopefully while they were still young enough to learn something. 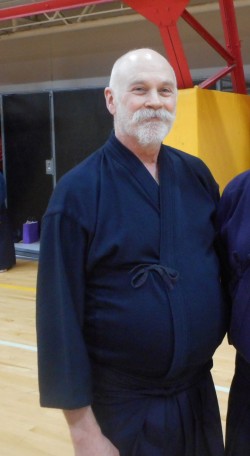