When you are starting out, you need lots of detail from your sensei. You rely on his instruction, first because you haven’t a clue, then because he’s telling you the secrets, and finally, because it’s a habit.

When you’re learning the basics your sensei will tell you what to do, how hard to do it, and when.

After you’ve got the basics, sensei will give you “the details”, he will fill in what you missed the first time he told you what to do. These are the secrets, although most of the time they are the obvious, so obvious you didn’t hear them.

Habit is a lovely thing, you should develop the habit of learning from sensei, of listening as he corrects you. This can carry over for a long time as just that, a habit. Eventually though, it changes from a “good habit” to a “lazy habit”. When teaching iaido I’ve even seen experienced students move through a kata and then pause at the point where sensei yells a correction at them.

Even when sensei has said nothing. The pause and correction has become part of the kata.

This will only go so far. It’s like searching for enlightenment by reading a holy book. One size does not fit all, you can get so far and then you have to strike out on your own, leaving the “faithful” behind. Faithful being those who follow the book and look no further. They are faithful to the teachers and the teachings, they have faith in them.

I spend a lot of time explaining to students with bad knees that they don’t have to get into seiza to do iaido. That a weak upper body calls for a weapon light enough to match the speed of their partners. In short, that it is OK to change and adapt the art to the reality of the situation.

That trying to fit the general instructions can often be the opposite of budo. If trying to get into a stance puts you in a weak position, that stance is “wrong” no matter who taught it as gospel.

Details in the self, so hard to learn. We are herd animals but budo is not about being part of a herd. Much as it seems so at times. 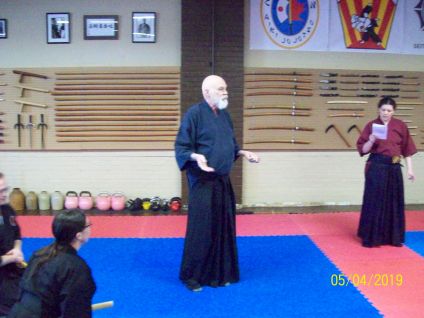