The 2018 FIK grading gudelines have been published in English so I might as well take the chance to go through them for those who don’t have them yet. I would especially like the Jodo administrators (regional examiners and grading officers) to read this, and compare the new edition of the guidelines to the 2012 edition.

First, there is little to worry about for those who are in charge of gradings, the nuts and bolts have not changed. There has been some rearrangement of articles, and an addition of more specific guidelines for iaido and jodo, rather than just referring to kendo.

Article 1 reads: “These regulations pertain to Kendo/Iaido/Jodo promotion examinations and the awarding of Dan grades administered by the International Kendo Federation.”

This has actually become a more general statement of purpose. A reference to “every affiliated organization” has been dropped, as well as the statement “When an Organization conducts a Dan/Kyu examination, this standard guideline applies”. Not to get too Lawyerly about it, but the article is reads as less stringent than before. That being said, the FIK guidelines should be applied where possible, as the purpose is to facilitate multi-organization recognition of rank.

To be clear about this, because article 1 may now imply it, the FIK does not administer gradings. The individual member organizations (your countries) do this. Your rank comes from your country, unless you grade in some other country, in which case that rank is recognized by your country and all other FIK affiliates. In the former version this relationship was a bit more clear, with the FIK defined as the affiliating body and “the organization” (your country) applying the guidelines.

Repeating this, these guidelines exist so that all countries (and Hawaii) in the FIK have something to use to provide a common set of standards. Countries are free to create grading standards which are more strict than these guidelines if they so desire, and Japan does. You should look to your own country’s bylaws for the exact standards. For the regional examiners for Jodo in Canada, those under my direction in other words, read the CKF bylaws, you will find that we use these guidelines with some small changes. Do not take it upon yourself to change these standards, either more strictly or less, without consultation with the Chief Examiner (me). If you want to change things I will have to take it to the CKF board of directors and ask that the bylaws be changed. I hope this is clear, neither you nor I get to change the standards without changing the bylaws. That is the definition of “standards”.

Article 2. states clearly that the president of each organization (country) grants rank from 1kyu to 10 dan (yes, ten dan, Japan does not award anything above 8dan but the FIK is not Japan, and the guidelines provide for 9 and 10dan). The reference to Kendo has been removed from the phrase “overall Kendo ability”. It is here that the statement about rank being mutually recognized as equivalent among Organizations is found.

(Applicants Qualifications), Article 3. the time between gradings has not changed. The shorter time period between ranks for those over 60 has also not changed, 5-6dan is 2 years, 6-7 is 3 years and 7-8 is 5 years. This has also been dropped in Japan where, as explained to me, people are living longer and ranks are getting a bit crowded at the higher levels.

Article 4 is the table of examiner’s qualifications and pass rates. This has not changed, the ranks from 5dan to 7dan still require 6 examiners of 7dan and over with a pass being 4. There has never been any reference to shogo or 8dans being required. I state this because some of the Jodo senior ranks have assumed these requirements exist. They do not, not here or in the CKF bylaws. Please read them.

Article 5 states that for 4dan and over, which require 6 panelists, 5 can be used but the pass is still 4. This has not changed but note that 4/5 is harder to pass than 4/6 so we should provide panels of 6 where possible.

Article 6 has a single change which I think may be more than a typo. It states in full

That new bolding serves to highlight the underlying principle here. Gradings are done at the Organization level, and panelists should be drawn from that organization first. Only if there are not enough panelists available should you look for panelists from other Organizations. In the past countries have called on the FIK to send panelists at FIK expense to sit on gradings. The FIK is not made of money any more, and now Iaido and Jodo sections are asking for delegations. The free ride is largely over, the FIK should not be expected to pay for these trips. The same applies to examiners from countries other than Japan, if you ask for them you should not ask the Organization to pay for them. Use your own people first.

For the regional Jodo examiners, use your own people first, and call on other panelists only at need, not for preference. The CKF is not made of money, and you should concentrate on training your own judges rather than call in others. This has always been the assumption and it continues.

Article 7 has not changed, exams for kyu and 8dan up, are to be determined by each country, with the single guideline that 8dan and higher exams should be rigorous and include Jitsugi evaluation.

Article 8 has not changed, examiners will be appointed by the president after discussion with all fully competent dan holders (all those with rank equal or higher than required for the grading rank being discussed). In practical terms for the CKF jodo section, this means that if you have the rank, you will be consulted about sitting a panel. This makes sense, we almost all have lives beyond Jodo and nobody should be expected or forced to sit a panel.

Article 9 is fees, no change, determined by the Organization.

Article 10. No change, Organziations can ask for the return of a rank should that grantee “disgrace the rank”.
Article 11, no change, the president signs (grants) certificates and the Organization will keep proper records.
Article 12, formerly 14, this is about grading in non_FIK affiliated countries and refers to another document.

Articles 13 and 14. From here the former article 5 is split out to describe Kendo exam topics. The reference to kyu standards has been removed.

Articles 16 and 17 are criteria for awarding dan grades. These have not changed.

Articles 18 to 20 are new, these refer to iaido and provide guidelines for kata, for instance 4and 5dan are AJKF iai 5 forms (1 Koryu form may be included) and it is 6 minutes time limit.

In Article 20 the sentance “Notwithstanding, the methodology for conducting the examination will be decided in accordance with conditions in the organizing federation”.

Articles 21-23 refer to Jodo and are almost identical to the Iaido articles, including the notwithstanding clause. We follow these guidelines in the Jodo section so there is no reason to go through them here.

For those in the Jodo sections who have not obtained the new guidelines document, please get in touch and I will send it to you. 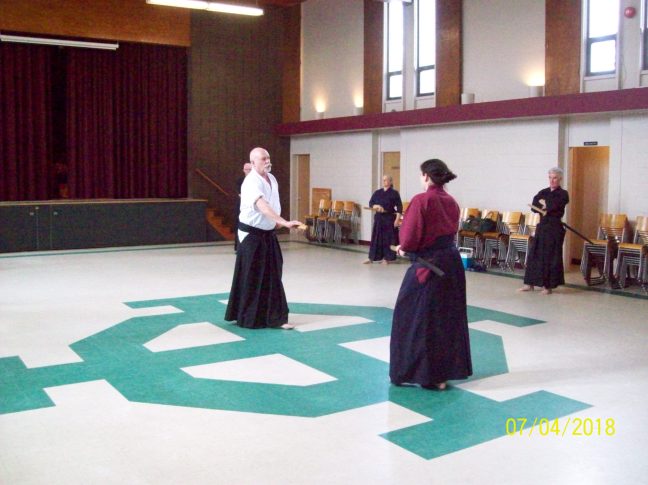