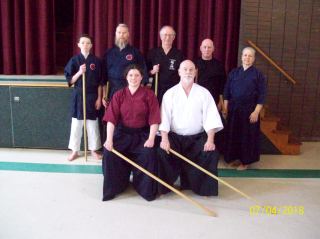 Just finished the spring Peterborough seminar. Thanks for the invite Mike Chinadi, it’s always a pleasure to practice with the “Terrors on the Trent”. The Warriors of the Waters?

We began with some Seitei Jodo in the morning, worked on the first few kihon, talking about the mechanics of things. We went on to look at kata 1, 2 and 4 for the beginners. Welcome to the stick folks! We had three or four youngsters trying it out for the first time. I hope you liked it and will continue. After that we split into two groups and the Pamurai showed the beginners that not all Jodo sensei are loud, mouthy, mean and grumpy. The seniors went on to work with kata 3, 5 and 6. Good enough for about 3 hours of practice.

Since I don’t see these folks very often there was a discussion of “changes since”. There are none. This was acually a theme for the whole weekend, “so what do we need to do now, since this has changed back to the way we used to do it, just as we were getting the new way all settled in”.

I know of zero changes to the jodo kata since I’ve been practicing, and about three to the iaido kata in my 30 years. Seriously. What we were talking about, specifically, in the jodo class was the timing of turning over the lower hand on osame. My comment was the same as the next day’s Seitei iai class. “Wha?” No not really, there are those who turn it over before the other guy moves back and those who move it over after. I move it after. It’s not a change, it’s how some folks do things vs how others do it. I’ve been told both. I’ve never found it in the book.

The afternoon was devoted to Tachi Uchi no Kurai, a sword partner practice from our Koryu iai school. I said we were going to study the ten standard forms of the set, that we were not going to do all the “other forms”. That was so we would all learn the exactly correct way to do things.

Then I said “look at what the form means, not what it looks like” and proceeded to show all 15 or 17 kata of the set plus a bunch from Tsumi Ai no Kurai (another partner set) because….. well because me I guess. Can’t stick to the plan. There are 10 kata in the set. There are loads of ways to do each kata and I wrote down in the manual all the ones I have been taught because I was more or less taught three sets by two people.

It’s Koryu. Get over it.

Contrary to what most of the internet tells us, the Shu part of Shu, Ha, Ri does not mean do nothing but copy your sensei for 20 years before you turn on your brain. Shu happens until you can do the kata roughly the way your sensei showed you, then he walks away and leaves the two of you to argue about whether the left foot angle is 0 degrees or 3 degrees, and where you measure it, inside edge, outside edge or middle toe to middle of heel.

Sure, you could ask sensei but he’s over there telling the other guys which line through the foot to measure that zero degrees. You could dive for the manual and check it out but… you mean you haven’t bought the manual yet? Well I guess we’re stuck with figuring it out ourselves. Let’s figure it out and when sensei drifts back here he will tell us which way he wants us to do it.

There is a right way, it’s the way that teaches you what the kata is trying to teach you. Sensei knows that way, or at least he’s a bit further along to figureing it out. It’s his job to set things up to let you understand how to figure it out.

On one of the kata we did three variations and then a fourth. The last one I just “made up” and slipped in there. Was that naughty of me? I don’t have a Menkyo Kaiden, or even a Kongen no Maki. I do have 30 years of doing this koryu, and another seven of swinging swords before that. But that’s all the authority I claim. I’m happy to admit nobody ever gave me any paper to hang on my wall so FWIW anything I say. Why the multiple versions of the same kata? To show that worrying about the angle of the foot is a bit “can’t see the forest for the trees”, when you just got four completely different ways to do the same thing… in fact you might have called them four different kata. Yet they really, truly, trust me I’m on this side of the room, are the same.

After a lovely dinner with many beers spread over two bars (do your bit for the local economy wherever you go), I stumbled to a few hours of sleep.

The next morning we headed to Lindsey and Martin Stabler’s dojo where we joined several of Jim Wilson’s seniors for an afternoon of Seitei Iai. Thanks for the invite to all, if it sounds like there is lots happening in the Kawartha Lakes, you’re right. Thanks to several dedicated martial artists who… wait for it… actually get along! Amazing.

I switched into “correct / not correct” mode once more as we went through the set of 12 kata. The folks in the room were experienced from, what, 5 to 15 years maybe? Plus a lot of other arts like karate and jujitsu for a lot more years. And I heard “so do we cut from here to here or there to there? Do we look first or turn like a robot? Do we…

Once again the trees! The trees! They’re closing in on me! 12 kata and five years, surely we know the kata by now don’t we? I mean which foot angle? No, we still don’t know? I wonder why?

Remember I said I knew three changes to Seitei iai? One is a foot turn on Soete Zuki. One is the angle of cut in Kesa Giri. Both happened way before you started practicing. One is… umm…. OK adding two more kata to the set to make 12. Hmm, when I started we had to learn 8, 9 and 10 from a book but I don’t call that a change, those were added after my sensei left Japan but before I started.

These changes we hear about every year? As the Pamurai pointed out last evening over “second beers” in Guelph, they are a function of “too much information”. When it was just a couple of guys in a couple of towns it was easy to see that changes are few and far between, but now that we’ve got the interweb and youtube sensei and folks are flitting all over the world to practice, the changes are coming fast and hard.

My advice yesterday was pretty simple. First, understand that the function of Seitei is to pass exams and win tournaments. That means you are performing for judges, and judging cannot be consistent. We may be moving toward motion capture judging, and I really believe it could be done, go look up last year’s 5 to 7dan championships. Could you do a computer analysis of how close they are to an ideal shape?

So stop trying to figure out how to pass an exam, instead concentrate on making the level you’re aiming for. That can be done fairly easily. You do what your sensei teaches you to do, you have faith in him, and in your ability to learn 12 short dances in 5 years, and you go show it to a panel.

After that it’s their problem, not yours. Remember that if you are presenting before a panel who have never seen you before, and you’re challenging a “big rank” the very first thing they are going to say to themselves is “who is this clown who has never bothered to show his face in front of us before”? They have a problem. Now they have to actually pay attention to what you are doing and that is the kiss of death unless they are very, very experienced.

Everyone can be failed for any exam ever. Because human. Because not robot. If a panel has seen Joe Blow for the last four years, trying to pass the exam, and getting better each year, it’s not hard to say “OK, good enough effort” and pass him. Some stranger who simply shows up and will disappear, never to help the local federation at all? Where’s the investment? Where’s the incentive to both look for the level and consciously not notice all the ways to fail them? Couple that with some sort of an idea that quotas are the way to demonstrate skill levels (turning a grading into a tournament where the top X% “win”) is hard.

That’s why the grading is the problem of the panel, not the challenger. Go show your iai. Stop trying to figure out what this or that panel wants to see, show your iaido and after that, it’s their problem. You will never, ever know why a panel passed or failed you unless your sensei is on the panel. He’s the only one who will (should) tell you what happened. Go challenge, pass or fail, then “ask your sensei”. If your sensei is in another country, well, he’s not going to have an answer for you.

So don’t worry about it, work toward the level, not the pass.

Given that, how do we do that? First, look in the book. Read the book. That is the baseline, seitei is NOT KORYU. (There are no standard forms of koryu, only the way your sensei does them.) There is no opinion on what the seitei book says, you can shove the book in your sensei’s face and say “but that’s not what it says here”.

Start with the book. Now, for the stuff that isn’t in the book, listen to your sensei. Your ONE sensei, not the six or eight sensei you stand in front of every year, YOUR sensei. He will tell you what goes on between what’s described in the book.

Now comes the hard part. You will sometimes practice with people who outrank your sensei, they will tell you how they do something. Smile and nod and say “hai” and do what they tell you for as long as you’re in the seminar. Then go back to what your sensei is telling you. If your sensei is there at the seminar and he says “no, to it like what hanshi just said” then change.

You may hear from some whiz bang 3dan who just came back from some other country and says “oh, it’s changed, we have to do this now”. Smile, nod and ignore him. Seriously, unless he talks with sensei and sensei says “I like that, we’ll do that now” smile, nod, say “very interesting” and ignore him.

Your sensei has been around a lot longer than you have, and way longer than that 3dan, so follow his advice or, if you figure you know more than your sensei, go start your own club. He’ll probably help you out the door. Do not waste your time practicing with someone you don’t respect, and if you’re chasing a dozen rabbits you don’t respect your sensei.

So a small part of the seminar was “how do you guys do this?” OK good. Here’s how I do it. Sometimes the same, sometimes different.

But most of the seminar was “this is how you hold the sword”. 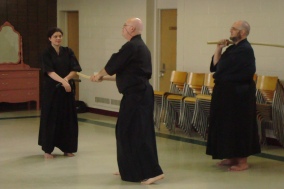